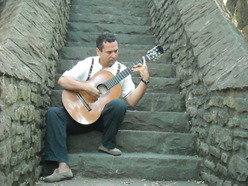 Emanuele Serra was born in Florence in 1964. He began to study classical guitar at the age of 6 with Vincenzo Degni. Later he attended the Giuseppe Verdi Conservatory in Milan. He attended many master classes with important guitarists: Roberto Porroni, David Russell and in particular Domenico Ascione. Decisive in his training were his contacts with Hopkinson Smith and the latter’s great performing art.

At the same time he graduated in Physics from Milan University and afterwards achieved a PhD in Physics at the Department of Pure and Applied Physics, Salford University (England). He works as a researcher at ENEA (Italian National Agency for New Technologies, Energy and Sustainable Economic Development).

He complements this job with concerts both as a soloist and in duets with his sister, the flautist Laura Serra. They have helped various cultural institutions and associations by performing concerts aimed at raising funds for restoration works.
Emanuele has released a CD dedicated to the music of John Dowland; another one dedicated to the music of Agustin Barrios Mangoré, receiving the compliments of the famous American musician Richard Dwight “Rico” Stover who rediscovered the music of Barrios after decades of neglect. He has also released a CD dedicated to Astor Piazzolla.